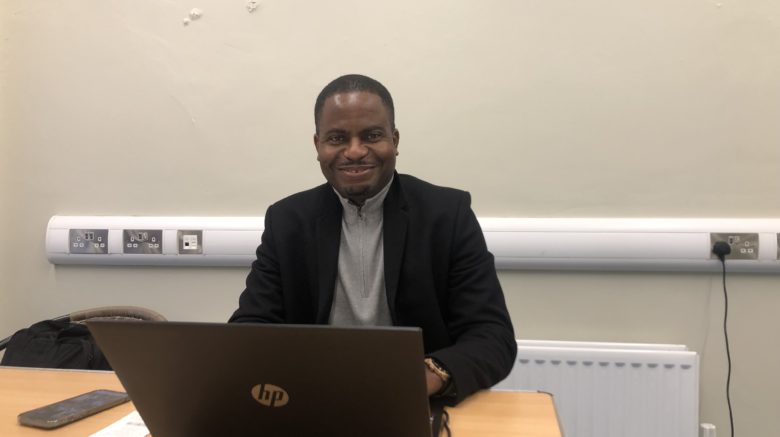 One of the groups who work at the Ballynafeigh Community Development Association offices is Belfast City of Sanctuary, a group which works to make Belfast a welcoming environment for refugees, asylum-seekers and new communities. Israel Eguaogie, the group’s co-ordinator, spoke to us about his work in the community sector in Belfast, and how we can all help to make the city a place of sanctuary.

Where are you from, and how long have you been in Belfast?

I was born in Nigeria, but I am also German, and just recently received my British citizenship, after being here for more than 10 years! I currently live in North Belfast, having moved here in 2008.

What brought you to Belfast?

I came from Germany to further my education. My background is as a computer technician, and I had been living in Dublin, working in a store where I fixed computers and mobile phones. I moved up to Belfast in 2008 to help a woman set up an internet café, and hopefully find some business for myself.

When I told my family they were concerned for me, they told me that I was entering a warzone, and that people didn’t go to Belfast and come back alive, but this just triggered my adrenaline!

The second time I went to Belfast I loved it, and the woman from the internet café helped me find accommodation, and to get a National Insurance number and get set up living in Belfast. Unfortunately the business I had hoped for just wasn’t there, so I decided to change course and pursue further education instead.

How did you get involved in the voluntary sector?

When I applied to university in Belfast, they didn’t accept my qualifications from Germany and Nigeria, so I had to start afresh. I started a course at the Northern Regional College, but I desperately needed a job, so I took a job that my friend suggested to me, in a nursing home.

When I worked in that nursing home it changed my whole perspective, I had never been in the midst of so many elderly people who were incapable of looking after themselves, it really triggered my inquisitiveness, and I changed my career path entirely!

I wanted to understand how the social structures worked in Northern Ireland, to understand the social services and healthcare services, so I started studying social work. Because I had to start from scratch, I started with Health & Social Care and worked my way up. I did an NVQ, a HND, and then applied to Queens.

But then illness destroyed that whole plan, I suffered a stroke and was bedbound for 9 months, housebound for 2 years, and in a wheelchair for 3 months. During this period I couldn’t work, and my wife had just given birth and so was not working either. I had to sell a property in Nigeria to get the resources we needed to live.

It was during this time that I met a woman from Sure Start, who explained the benefit system here to me, and explained that we were entitled to benefits if we were not working, and how we could access these. I was so surprised, I didn’t realise that there were so many organisations here who could help us! She got us the help we needed, and we moved from a private rented property to social housing, and she found womens’ groups for my wife that she really benefitted from.

While I was in hospital for a few months, I met some people who were asylum seekers, and they had no one supporting them or even coming to visit them, so they felt very excluded. I would talk with them, and go on walks with them, and even after I was discharged I would come and visit them. This is how I started iAssist-NI, at the start it was just me supporting a few of my friends, but then I started digging into the system to figure out why people are segregated like this.

I made a vow that when I got better I would start volunteering, I wanted to share information and help people like myself who might not know where to look for help, or who were becoming isolated. As I got better we started the Nigerian Community NI (NICONI), and I was the first chairperson. The aim was to source resources and training opportunities for people, organising workshops and drop-ins etc.

When did you start working with Belfast City of Sanctuary?

Through being chairperson of of NICONI, I met Colin Flynn who was then chairperson of Belfast City of Sanctuary, he introduced me to them, and the rest is history.

I started in their management committee in 2017, became the chairperson in 2018 until last year, when I stepped down in December 2021. I then started officially working for them in March this year.

Do you think Belfast is a welcoming place?

To some extent, yes. But welcoming means different things to different people.

When I was in Germany I didn’t feel welcomed at all, whereas when I came to Belfast I did feel welcomed. At least some people are very open-minded and welcome you.

But talking about systemic racism is not welcoming at all. The system creates a hostile environment for people who are seeking asylum, or even immigrants from places like Eastern Europe. This promotes exclusion and tension. In terms of welcoming, to some extent Belfast is very welcoming, but the system is not welcoming.

Has this changed in Belfast since you have lived here?

Maybe 5%? A lot of it depends on geographical location; in some areas it has got better, in some it hasn’t changed, and in others it has got worse. But its very individual, my experience is very different from someone else’s.

When I first arrived in 2008, all the funding and support was available for refugees from Sudan, in 2010-11 it was Somalians who enjoyed that benefit. This then became the Syrian resettlement scheme, which has now become the Ukrainian resettlement scheme. This system creates tension, and is not very welcoming at all.

What can people do to make Belfast more welcoming?

Participation and inclusiveness – how do we promote this? Through dialogues, through workshops, drop-ins, talking to each other. You can only know me when you talk to me, you can’t know me from afar. Things need to be created that will bring people together. Its about telling your story, but also about listening to other people’s stories, integration comes from both ways.

But this also needs resources to set up these workshops and dialogues. Working with people from ethnic minorities, not just working for them. This promotes the idea of co-ownership and co-existence. But this is all not possible without resources.